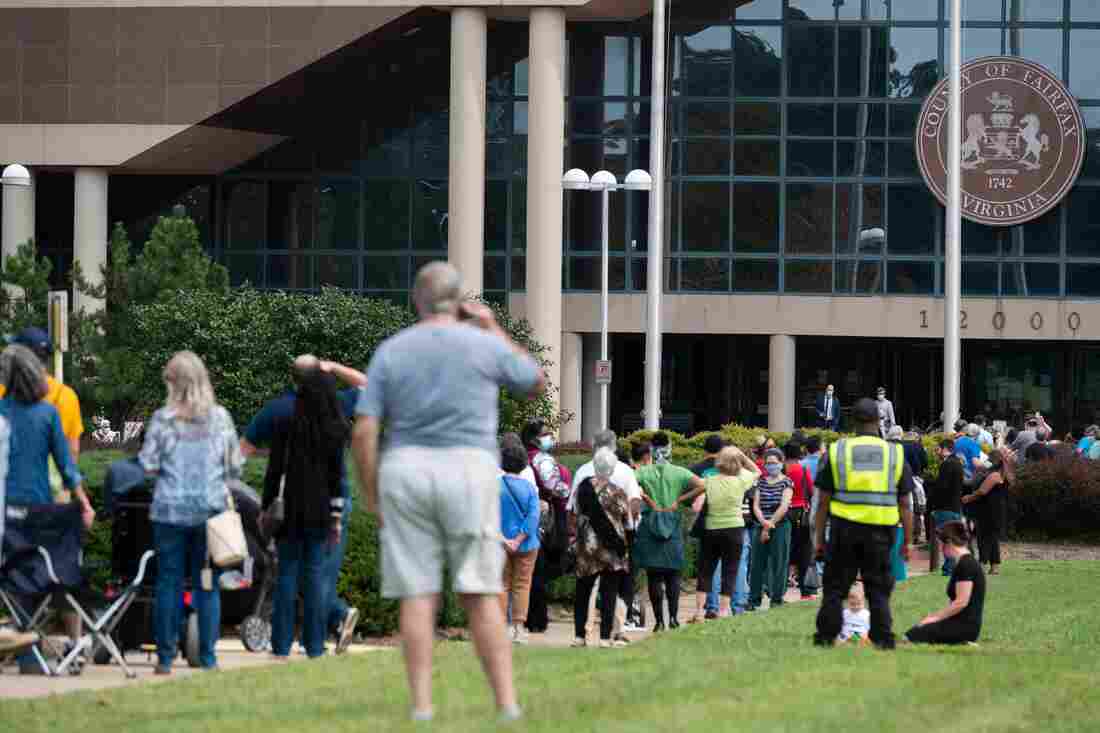 Voters wait in line to cast their ballot at an early voting location in Fairfax, Va., on Sept. 18. Growing tensions in the country have some election officials worried about potential violence at polling places. Voters wait in line to cast their ballot at an early voting location in Fairfax, Va., on Sept. 18. Growing tensions in the country have some election officials worried about potential violence at polling places.

Concern is growing over potential confrontations at polling places due to deep partisan divides and baseless claims by President Trump that Democrats will “steal” the election.

In Tuesday night’s debate with Democrat Joe Biden, Trump repeated his attacks on widespread mail-in voting, calling it a “disaster” and saying “this is not going to end well.”

The president also urged his supporters, as he has done before, “to go into the polls and watch very carefully.”

Such appeals have unnerved voting rights advocates and election officials, especially in light of civil unrest in several cities around the country that have pitted armed groups from the left and right against each other.

The concerns about potential polling place violence come at a time of immense stress for election officials, who are contending with how to run an election during a pandemic while also trying to reassure voters that the democratic process remains fair and transparent even amid the president’s increasingly strident rhetoric about voting.

The recent appearance of chanting Trump supporters outside an early voting site in Fairfax County, Virginia, has also raised alarms.

Voters were not blocked from voting at the site, but some said they felt intimidated by people who waved campaign signs and shouted, “Four more years.” This followed the arrival of a noisy caravan of Trump supporters on motorcycles in a nearby parking lot.

The incident led Virginia Attorney General Mark Herring, a Democrat, to issue an opinion noting that there are federal and state laws prohibiting voter intimidation.

“Voting is a fundamental right. It is the foundation of our democracy, and no Virginian should ever feel for their safety or feel intimidated when they exercise their right to vote,” he said.

Herring said it was unclear, however, if any laws were broken in the Fairfax case, in part because the Trump supporters stayed more than the required 40-foot distance from the polls.

Still, the incident was a sign of how fraught this year’s elections have become. Republicans say people overreacted and no one should have felt intimidated. But Democrats point to Trump’s comments and to a recent militant-sounding appeal from his son, Donald Trump Jr., for supporters to protect the integrity of the election.

“We need every able-bodied man, woman to join Army for Trump’s election security operation at defendyourballot.com,” Trump Jr. said in a video posted online. “We need you to help us watch them. Not just on Election Day, but also during early voting and at the counting boards. President Trump is going to win. Don’t let them steal it.”

The Republican National Committee announced months ago that it planned to recruit as many as 50,000 people to serve as poll watchers this year. RNC chief counsel Justin Riemer told NPR that their main jobs would be to monitor voting for irregularities that might be used as evidence in later legal challenges, and to help with get-out-the-vote efforts.

“The Democrats would say that we are there to suppress the vote. That is absolutely not the case. I can assure you that that is not why we have volunteers and attorneys participating in this process,” Riemer said.

Most states allow political parties and campaigns to appoint people to sit inside polling sites to monitor voting. But there are specific rules governing what they can and can’t do. Generally, if a poll watcher has a concern or wants to challenge a voter’s qualifications, they’re required to bring the issue up with the chief on-site election official. They are strictly prohibited from interfering with or directly approaching voters.

It’s the self-appointed poll watchers — those who might show up at the polls unannounced — that have some people more worried. Trump added to those concerns Tuesday when he complained that his supporters were prevented from monitoring an early-voting site in Philadelphia, calling it a sign of “corruption.”

He failed to mention that the individuals had not been registered as poll watchers and that the location was a satellite elections office, not an official polling site.

Josh Horwitz, executive director of the Coalition to Stop Gun Violence, said he’s also worried about what might happen if some of those who come to the polls are armed. He noted the increased presence of armed militia at protests and political rallies around the country.

“We’re not trying to cause panic or anything like that. All we’re asking is that local election officials and state officials do what they can in the remaining month to best protect their polling places and the integrity of the elections,” he said.

His group, along with Guns Down America, issued a report noting that few states have laws expressly prohibiting guns at polling sites. Although some prohibit them at schools and county buildings that often serve as polling locations.

The gun control groups recommended that state and local governments tighten such laws and, at the very least, train poll workers on how to respond if a problem does arise.

Most election officials try to de-escalate potential conflicts first. In Fairfax County, they asked the Trump supporters to move back and not block voters’ access, and Republicans said they complied. In more serious cases, officials might call in the police.

All the talk of trouble at the polls could have a negative effect on turnout, worries Kristen Clarke, who’s president and executive director of the Lawyers Committee for Civil Rights Under Law. Her group runs Election Protection, a national network of lawyers on call to help voters with any problems they encounter.

Clarke notes that past threats by Trump and others to send armies of supporters to watch the polls never materialized.

“This is a pattern and practice that we have seen throughout the years, these wild exaggerations and bold proclamations that often fall flat in the end, but are intended to have a particular effect, intended to discourage or deter people from voting,” she said.

Clarke doesn’t think voters should be overly worried, but prepared instead to report problems if they do occur.

The Attack on Voting in the 2020 Elections