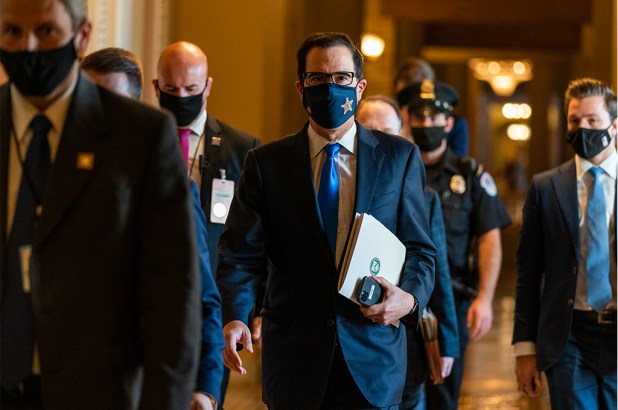 The Senate on Wednesday overwhelmingly passed a spending bill to prevent a partial government shutdown at midnight.

The Republican-led Senate voted 84-10 to pass the spending bill, which extends federal agency funding until Dec. 11, avoiding a bitter partisan fight ahead of the Nov. 3 election.

The Democrat-controlled House already passed the bill in a 359-57 vote last week.

The bill now goes to President Trump’s desk. He’s expected to sign it, preventing federal workers from missing paychecks when funds run out at midnight.

House Speaker Nancy Pelosi and Treasury Secretary Steve Mnuchin brokered the short-term spending bill as they continue to be at an impasse over coronavirus relief legislation.

Pelosi (D-Calif.) said in a statement announcing the legislation that she extracted various policy concessions.

Pelosi said the bill adds $8 billion in food assistance over current spending levels and prevents the use of “funds for farmers” held by the Commodity Credit Corporation “from being misused for a Big Oil bailout.”

Mnuchin, a top White House negotiator with Democrats in Congress, and Pelosi have failed to agree on terms for a COVID-19 relief package that would send stimulus checks and renew an expired unemployment insurance supplement.

The Treasury secretary and Pelosi met for about 90 minutes Wednesday to discuss a possible pandemic relief bill, but did not reach a breakthrough.

Pelosi was asked this month if “something is better than nothing” in a stimulus deal. She said: “No… It’s a missed opportunity.”

Biden and Trump agreed on at least one thing in debate: Support for electric vehicles