PEMBA – Peter N’Guila used to have no trouble supporting his family of three on his consultant’s salary. But since Islamic State-linked insurgents attacked a northern Mozambique gas hub town last month, he has seven more mouths to feed.

Hundreds of people fleeing ongoing hostilities in Palma have been pouring into Pemba, a port city around 155 miles to the south already bursting with those displaced by previous rounds of Islamist violence and a deadly cyclone in 2019.

Around 90 percent of those arriving in Pemba are taken in by relatives, while others cram into schools, hotels, makeshift tented camps and a sports stadium, said Francesca Fontanini, spokeswoman for the United Nations refugee agency UNHCR.

N’Guila’s sister, nephew, their spouses and children found a place in his two-bedroom home, but he is not sure how long he can support them.

“I used to buy one sack of rice, but now I must buy two sacks,” he said. “One kilogram of fish now isn’t enough; I have to buy two kilograms.”

His relatives arrived with only the clothes on their backs, he told Reuters, so they also need clothing and blankets.

Palma was once considered a refuge for those fleeing Islamist violence elsewhere in Cabo Delgado province because of its proximity to gas projects worth $60 billion.

Insurgents have stepped up attacks in the province over the past year, taking over entire towns for days and possibly weeks, at a time.

The violence has displaced nearly 690,000 people since 2017, when the insurgency began, said UNHCR’s Fontanini.

Pemba, a city of just over 200,000 in 2017, had already seen its population swell by almost three-quarters by February, according to the UN humanitarian agency OCHA, including 7,400 people who arrived in the space of a week in October.

The city is also still hosting hundreds displaced by Cyclone Kenneth in 2019, the IOM said. Kenneth destroyed more than 34,000 homes and more than 31,000 hectares of crops, according to OCHA.

Last year, local authorities opened resettlements camps outside of Pemba for the city’s new residents, but only a few thousand have chosen to move, the IOM said.

Aid workers who visited the sites say conditions are poor. Following a visit to one site in March, UNHCR officials described it as lacking food, water, electricity and healthcare. It was also hard to reach and close to a swamp, leaving residents afraid of snakes, they said.

Nearly 2,000 people had arrived in Pemba from Palma as of Saturday, according to the International Organization of Migration (IOM) and more were believed on the way.

The attack on Palma, which began on March 24, has displaced tens of thousands more who scattered into surrounding bush or to the beach, to try to catch boats, aid workers say.

Around 1,200 survivors reached Pemba on Thursday on a ferry organized by French energy giant Total, some of them crying after spending days hiding in the bush.

The rising population is putting pressure on food and water supplies as well as healthcare and other services, aid workers said.

“The city of Pemba and the infrastructure will not support the number of residents,” said Manuel Nota, who heads the Pemba branch of the Catholic charity Caritas.

N’Guila, 61, said it is now difficult to get food in the busy markets and that the government and aid agencies needed to help those who were helping others get their lives back.

“Even when you pass through the markets … you can see that it is overcrowded,” he said. “Pemba is full.”

A former California resident has been sentenced to three months in federal prison for gunning down a protected elephant seal in the state, authorities said.

Jordan Gerbich, 30, was sentenced on Monday for killing the marine mammal in September 2019 at an elephant seal viewing area near the Piedras Blancas State Marine Reserve in San Simeon, federal prosecutors said.

Gerbich, who now lives in Utah, pleaded guilty last December to one count of illegally taking a marine mammal.

He used a .45-caliber pistol to shoot and kill the seal resting on the beach in the Piedras Blancas rookery, according to his plea agreement.

Northern elephant seals — a protected species under the Marine Mammal Protection Act — live up and down the Pacific coast, usually gathering in areas on land called rookeries to breed.

The main threats that the mammals face include getting tangled in fishing gear and being hit by ships, according to the National Oceanic and Atmospheric Administration

San Diego Zoo worker bitten by snake with no antivenom

A San Diego Zoo employee was hospitalized Monday afternoon after being bitten by a venomous snake, according to reports.

The incident occurred as the wildlife care specialist was caring for the African bush viper, scientifically known as Atheris squamigera, in a non-public area, the zoo said.

The zoo added, “In keeping with our protocols, the staff member was immediately taken to a hospital for evaluation and medical care, and we remain in close contact.”

The staff member is currently in unknown condition, 10 News reported.

“Although the San Diego Zoo cares for a number of venomous reptiles, incidents like this are very rare, and the snake was contained at all times with no risk of an escape,” the zoo added in a statement.

National Geographic states about the viper native to parts of western and central Africa: “Their venom typically kills within days.”

The symptoms from a bite from the reptile include “serious kidney damage and disrupt blood clotting and flow” and “severe inflammation, hemorrhaging, and tissue death.”

The snake “can cause fevers or internal bleeding, which can be fatal,” a study from the American College of Medical Toxicology (ACMT) reported.

There is no known antivenom for an African bush viper’s poison, according to the Seneca Park Zoo in Rochester, New York.

The Associated Press contributed to this report.

The ex-girlfriend of Hollywood scion Chet Hanks is suing him for $1 million, claiming he physically and verbally abused her during their relationship.

Attorneys for Kiana Parker charged that Hanks — the 30-year-old son of actors Tom Hanks and Rita Wilson — had shown “an ever-escalating pattern of domestic abuse,” as they announced the lawsuit during a press conference in Texas on Tuesday.

“This is about violence within the confines of a relationship between a man and a woman, a man who mentally and physically and psychologically battered, Kiana Parker,” lawyer Kevin Murray said.

The suit, filed Monday in Fort Bend County, details several alleged incidents of abuse, including a Jan. 8 fight that led Parker to file a restraining order against Hanks, which was granted later that month.

The two began dating in March 2019 and moved in together about a year later, the court documents say.

Kiana Parker seen during a video of an alleged altercation between her and ex Chet Hanks. 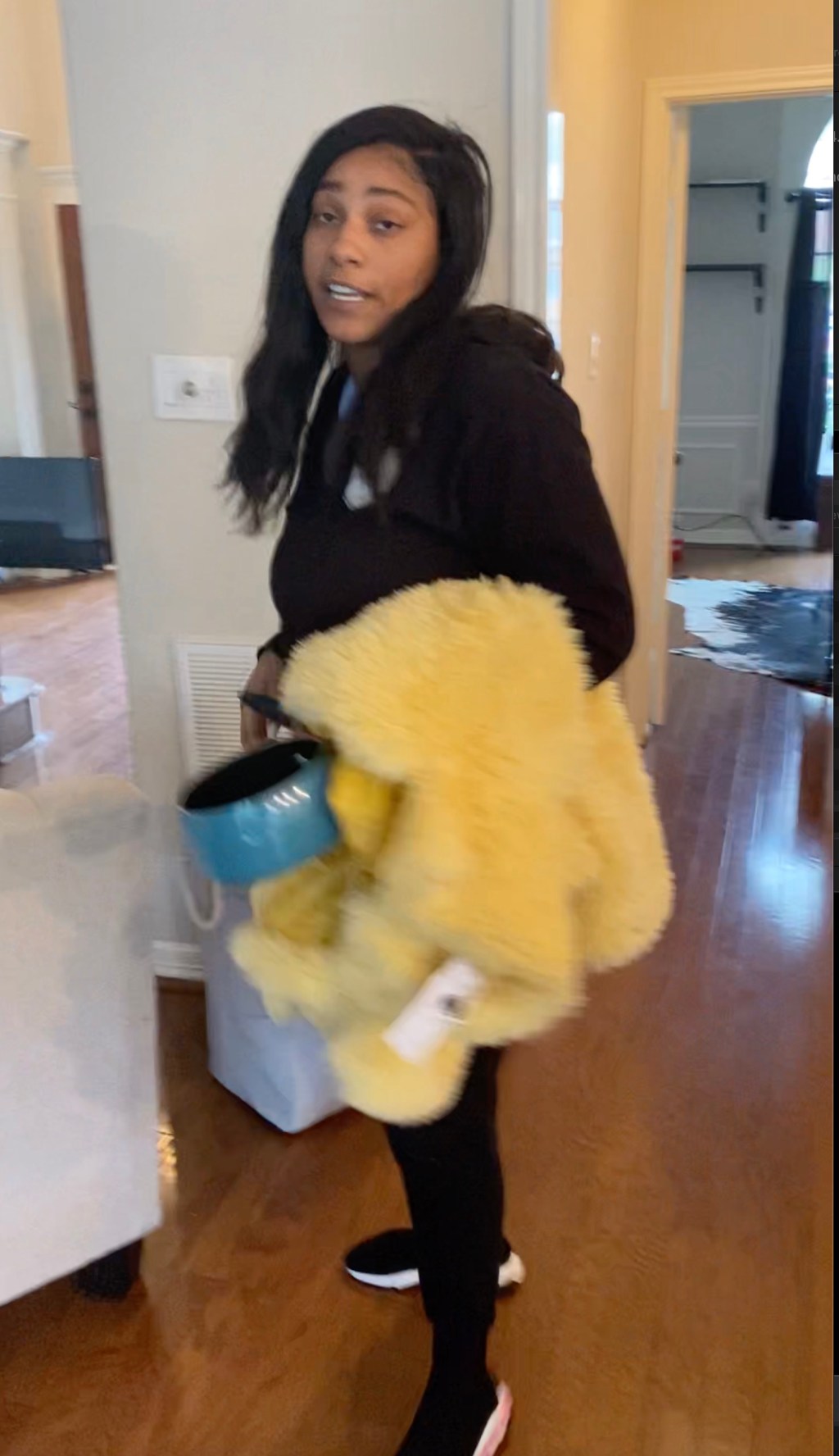 Kiana Parker in a screengrab from Chet Hanks’ video.

Table for one under “Cruz Michael Cauchi” at SUR.

On Oct. 18, 2020, Parker claims Hanks became enraged when she wanted to leave their hotel room in New Orleans, where he was filming for the Showtime series “Your Honor.”

Later that night, he allegedly “became aggressive and hostile.” When she tried to leave, Hanks “grabbed her with great force, by her right arm causing instant pain,” the suit alleges.

“Defendant Hanks refused to release the grip, and as Parker sought to get out of the violent situation, Defendant Hanks pushed her with such force that Parker knocked over tables in the room,” the court docs say.

As she tried to get away again, Hanks allegedly pushed her, called her a “ghetto black bitch” and smashed her phone into pieces, according to the lawsuit.

He then allegedly warned her not to report the incident, saying that she should remember he was “Chet Hanks and she wasn’t shit, no one would believe her, she was just a ghetto black bitch.”

The next month, in Sugar Land, Texas, Hanks allegedly “threatened to “blow [Parker’s] brains out” in a murder-suicide, the lawsuit claims. The conversation allegedly took place while Parker’s 9-year-old twins were in the house.

The couple finally agreed to split on Jan. 6, but two days later, when Parker went to move her stuff out of the Sugar Land house, Hanks allegedly “became extremely aggressive.”

She claims he came at her with a knife — and that she defended herself by swinging a pot at his head.

Footage published by TMZ last month showed Hanks accusing Parker of threatening him with a knife, not the other way around.

The video showed Parker lunging at Hanks with a pot, leaving him with a gushing head wound. He also accused her of stealing his money and credit cards.

Hanks subsequently sued Parker for assault and battery, theft and return of the money she allegedly stole from him.

He didn’t immediately respond to Parker’s lawsuit on Tuesday, but about an hour after the press conference, announced he would be dropping his “White Boy Summer” music video early.

“F–k it,” he wrote on Instagram. “I was gonna wait til Friday but I see y’all really ready for this. ‘White Boy Summer’ dropping 6 p.m. today.”

Parker’s lawyers, Murray and D’Angelo Lowe, said they had reached out to Hanks’ and his famous parents about Parker’s accusations “multiple times” in January and February, but never heard back.

“I’m sorry, Chet Hanks would have been charged by now,” Lowe added. “Instead, he has not been charged and has made a mockery of black women in the criminal justice system by proclaiming that it’s going to be a ‘white boy summer,’ and a ‘black queen summer’ while knowing he mentally and physically abused a black queen.”

Hanks’ attorney, Marty Singer, told The Post in statement that, “We consider the claims filed by Kiana Parker to be a shakedown.”

Singer noted that his client was suing Parker over the January incident, claiming that “while Ms. Parker was accompanied by a huge male carrying a gun she viciously attacked Chet which caused him to profusely bleed.”

“Her claims are completely false, fabricated and fictional,” Singer added.