She doesn’t give a flying frock.

Commandeering the cockpit in lacy lingerie and a flirty garter belt, one Playboy playmate is cyber-spanking Southwest Airlines for nearly boob-shaming her off of a flight.

Eve J. Marie, 26, decided to showcase her curvy carry-ons to flip off the airline after being “humiliated and embarrassed” by a flight attendant who, back in November, tried booting her off of an aircraft for wearing a low-cut top.

“When they threatened to remove me off the plane if I didn’t have a change of clothes, I felt completely humiliated, embarrassed and highly offended,” the sultry social-media stunner told Jam Press following the incident.

At the time, Marie was traveling from Dallas, Texas, to Tulsa, Oklahoma, with her 7-year-old son. She boarded the plane wearing a skin-tight leopard print jumpsuit with a plunging neckline that accentuated her copious cleavage.

Eve J. Marie claims a Southwest flight attendant told her she had to change out of her low-cut shirt or she’d be removed from her flight in November. 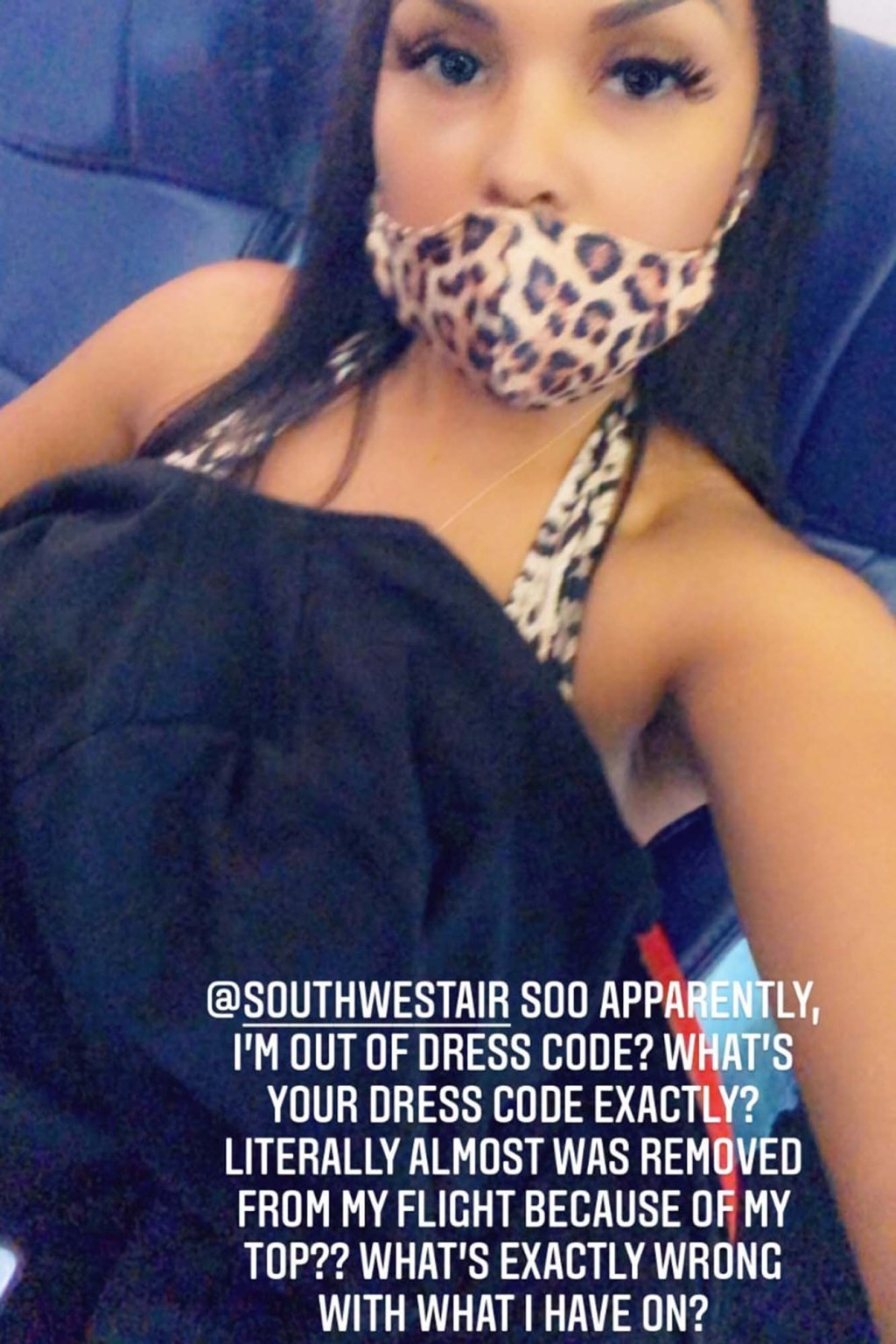 Eve J. Marie claims a Southwest flight attendant told her she had to change out of her low-cut shirt or she’d be removed from her flight in November.

KYIV, Ukraine — The authoritarian leader of Belarus on Thursday…

Ahead of takeoff, Marie claims a Southwest steward said her eye-popping apparel was in violation of the airline’s dress code.

The buxom bombshell had two options: ditch the sexy ‘fit or hit the nearest exit.

Marie ultimately agreed to cover up her fleshy flotation devices with the flight attendant’s work uniform in order to reach her final destination without any further interruption or awkwardness.

But now, she’s unbuckling her seatbelt and defiantly moving about her very own private aircraft wearing next to nothing in a saucy series of sexy Instagram snaps.

“Sit back, relax, and enjoy this ride,” a scantily clad Marie captioned one of her mile-high hot shots.

“You coming aboard this jet?” she questioned under another photo of herself straddling the aisle of her plane with both knees resting on the arms of separate chairs.

Marie’s sexy flex in the friendly skies caught the eyes, likes and comments of her over 228,000 Insta-frequent flyers.

“Now that’s what a in flight snack should look like. Gorgeous,” one of her followers wrote.

“It’s going to be a bumpy ride,” another fan commented, emphasizing his delight with a series of heart and winking emojis.

Hikers who don’t follow trail signs in Hawaii could face more than just danger to their lives — they could also be required to pay for their own rescue.

Hawaiian lawmakers are considering a bill that could require hikers to reimburse local rescue teams if they had to be saved because they left marked trails, entered clearly-marked private property or ignored signs saying a trail is closed, according to recent reports.

SB 363 would also give those hikers additional, criminal fines for petty misdemeanor charges.

State lawmakers are also considering another bill, SB 700, which has been revised to allow local rescue teams to choose whether they have hikers reimburse them for any fees associated with their rescue.

According to the Honolulu Star-Advertiser, similar bills have previously been introduced in Hawaii’s House and Senate before.

This time, the bills are being considered as a way to help Hawaii’s budget, which is “straining” because of the coronavirus pandemic, the newspaper reported.

“It’s an issue that has been brought up in the past in a number of ways, especially in times when budgets are thin and resources are limited,” state Sen. Chris Lee told the Star-Advertiser. “It’s a discussion that everybody is interested in having this year.”

According to the newspaper, the state’s Fire Department opposes the bills.

“The Honolulu Fire Department does not want to deter anyone from calling 911, thinking there is going to be a cost associated with them getting help,” HFD spokesperson Carl Otsuka told the Star-Advertiser.

Meanwhile, the Hawaii Department of Land and Natural Resources (DLNR) Chairwoman Suzanne Case, previously supported an earlier version of SB 700 that required hikers to pay back their rescue costs in written testimony, according to the Star-Advertiser.

“The Department is in support of any strategy that will incentivize the general public to stay within authorized managed areas and already has statutory penalties for violation of laws and rules adopted specifically for going into closed areas,” Case wrote. “While these penalties are in place, absent enforcement and citations, they are clearly not a deterrent.”

The Star-Advertiser reported that Case also noted in her testimony that the DLNR would defer to counties — who are responsible for search and rescue operations — on whether they required hikers to pay for their rescue or not.

According to the Star-Advertiser, hikers frequently get into trouble on the islands and rescuing them can be a dangerous and expensive task.

For people fatigued with quarantine amid the COVID-19 pandemic, a new study from Germany recommends what to do after getting out of the house.

Don’t go out to eat or get a haircut, don’t go shopping for food or go to the gym —  go to a museum.

According to the Berlin Institute of Technology (TU Berlin) in Germany, the risk of COVID-19 infection via aerosol particles is far lower in museums than in supermarkets, restaurants, offices and on public transportation.

Variables considered were the quality of the airflow, the type of activity carried out in the space, and the dose of aerosol particles inhaled by people in a room.

Outdoor activities all increased last year in the face of canceled indoor events and cautions about the dangers of catching the virus while around other people inside.

The study said food shopping, dining indoors or exercising in a gym are at least twice as risky as visiting a museum to view art.

Museums, however, haven’t been considered essential to the populace.

Celeste DeWald, the executive director of the California Association of Museums, told the New York Times earlier this month: “It’s frustrating to see crowded shopping malls and retail spaces and airports, yet museums are completely closed and many have not been able to reopen at all for the last 10 months. […] There is a unique impact on museums.”

“The wildly uneven criteria speak more to the powerful, well-funded lobbies helping shape public health policy than to anything resembling science or even common sense,” Miranda wrote. “At a moment in which it is possible to get a tattoo or paw the goods at Chanel in Beverly Hills, it should be possible to visit a museum. Period.”

A new version of the first known on-screen kiss between two African-American actors has been discovered in the collections of the National Library of Norway.

The 1898 film, directed by US film industry pioneer William Selig, stars vaudeville actors Saint Suttle and Gertie Brown and shows them courting and kissing in front of a cloth backdrop.

The only previously known copy of ‘Something Good – Negro Kiss’ was acquired from a collector in Louisiana in 2017 and added to the US Library of Congress’ National Film Registry in 2018 for its cultural value.

It depicts a tender scene between two African-American actors at a time when caricatures of Black life were more common.

The version identified by Norway’s National Library differs in that it is longer and the actors are filmed from a greater distance.

“It is more complex, there is more of a prelude before the kisses, with wooing, refusal and negotiation,” said Eirik Frisvold Hanssen, head of the National Library of Norway’s film section.

It was taken to Norway by a young Norwegian man, who likely bought a copy at the time in the United States and brought it back home, the National Library said. It is among the oldest films in the library’s collections.