The Rev. Jesse Jackson joined hundreds of people in Minneapolis on Tuesday night celebrating the conviction of Derek Chauvin for the killing of George Floyd.

The civil rights leader stopped by George Floyd Square — a community memorial site for Floyd located where he was killed last May.

“What’s his name?” Jackson shouted to the exuberant crowd, who replied, “George Floyd!”

Fireworks were also set off at the celebration and people danced at times to Bill Withers’ “Lovely Day,” and DMX’s “Party Up.”

Chauvin was the first of four since-fired Minneapolis cops to go to trial over the death of Floyd.

He knelt on Floyd’s neck for more than nine minutes during an arrest on a Minneapolis street.

Chauvin is set to be sentenced in eight weeks, where he faces a maximum of 40 years in prison.

The body of a Dallas businessman who has been missing since October was found in a wooded area of the Texas city.

The Dallas County Medical Examiner identified the remains as Alan White, an executive at accounting firm KPMG who was last seen gassing up his Porsche after a gym visit on Oct. 22.

The 55-year-old’s vehicle was found about a week later, and there were no signs of a struggle or accident.

There is a $10,000 reward for information related to the case.

The only people required to wear masks outside at Disney World will be the costumed characters.

The Orlando, Fla., park will only require customers to wear masks in indoor areas and on public transportation beginning Saturday, Blog Mickey reported.

The Friday announcement comes a day after Disney chief executive Bob Chapek touted the Centers for Disease Control and Prevention decision to lift mask requirements as “very big news,” that will cause an attendance spike at theme parks.

A relaxed mask policy, Chapek added, will be a relief to Disney World customers, “particularly if anybody’s been in Florida in the middle of summer with a mask on. That could be quite daunting.”

Disneyland in California is still subject to the state’s mask order.

At least seven Palestinians were reported killed in Gaza City by an Israeli airstrike early Saturday as the worst fighting between Israel and Hamas since 2014 ground on with no quick end in sight, despite efforts by the U.S. and Egypt to broker a ceasefire.

Palestinian media quoted by The Times of Israel reported that children were among the dead, while several other people were trapped in the rubble of a house.

If the death toll is confirmed, it would be the highest number of civilian casualties from a single airstrike in the current conflict, which began Monday.

The Israeli Defense Forces (IDF) did not respond directly to the report of the deadly airstrike, but said in a statement reported by the Times of Israel that it had targeted several rocket launching sites and two Hamas “terror squads.”

“The attacks were carried out through a quick closing of the circle, lethal fire capability and accurate intelligence of the Gaza Division,” they said.

A nurse holds a baby who was pulled from a building wreckage following an Israeli air strike at Al-Shifa Hospital in Gaza City on May 15, 2021. 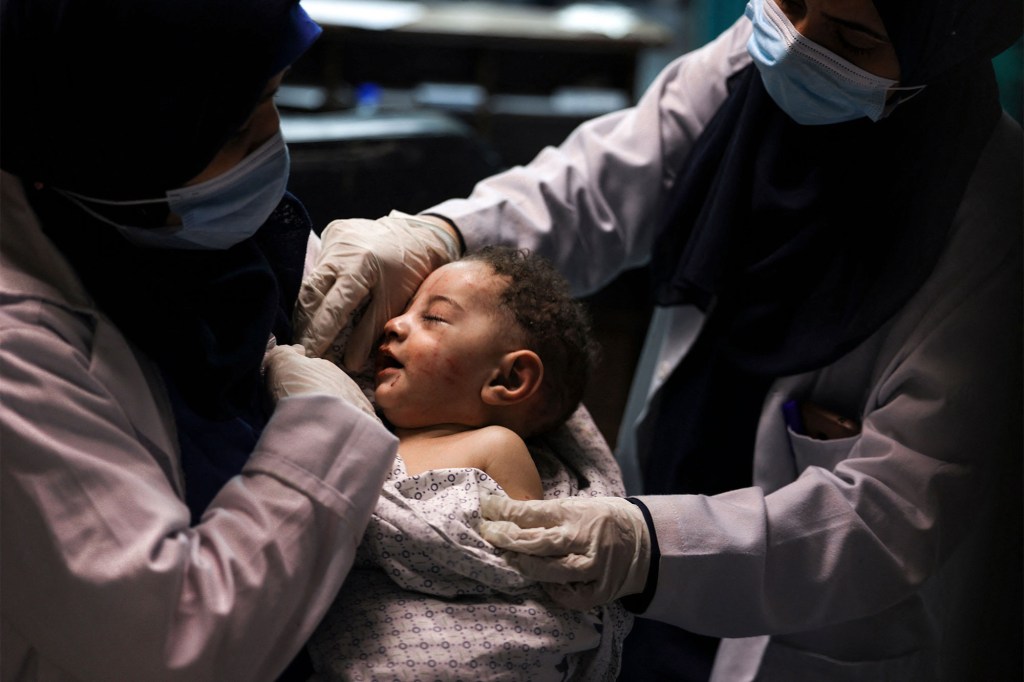 Nurses care for a baby who lost seven family members after an Israeli air strike struck a refugee camp in Gaza City on May 15, 2021.

Mets’ seven-game win streak comes to an end after a…

Earlier in the evening, the IDF tweeted dramatic footage of a fireball caused by a rocket fired from Gaza hitting a fuel depot in the Mediterranean port of Ashdod.

“Barrages of rockets are being fired non-stop from Gaza into southern Israel,” the IDF wrote. “Tonight, a rocket hit the city of Ashdod—see the damage for yourself. This won’t go unanswered.”

No injuries were reported from the rocket strike in Ashdod, which was the third in the city across Friday night into Saturday morning. An earlier strike on the port and a direct hit on an apartment building also caused no reported injuries.

Nine Israelis have died during the latest conflict, including a 6-year-old boy and a soldier. Authorities in Gaza have reported that at least 126 people have been killed, including 31 children and 20 women. Israel claims that many of those civilian casualties have been caused by Hamas-launched rockets falling short of their targets.

Officials from Washington and Cairo are in the region trying to coax a halt to the fighting and the United Nations Security Council is expected to hold an emergency meeting Sunday morning. An Egyptian intelligence official told the Associated Press that Israel has already turned down an Egyptian proposal for a one-year cease-fire that Hamas had accepted.

Hamas has fired some 2,000 rockets toward Israel since Monday, according to the Israeli military.

How To Build A Dog House – Insulated Dog House Plans