The upcoming Spidey title is shaping up to be a visually stunning one.

With Marvel’s Spider-Man: Miles Morales launching less than a month from now, we’ve been learning plenty of new things about the game of late. And though this might not be a full numbered sequel, the excitement for it still continues ramp up.

Much of the new details coming out on the game in the next few days will be coming through Game Informer’s cover story- which has kicked off with a bunch of new screenshots. On top of showcasing the game’s much crisper visuals with its ray-tracing in full effect, the screenshots also show off new suits, focus on baddies like Rhino and the Tinkerer, show Miles in the subway and walking through the city, and various other scenes of combat, web-swinging, and more. Check them out in the gallery below.

Marvel’s Spider-Man: Miles Morales recently went gold. It will be releasing for PS5 and PS4 on November 12.

Recently, we got to saw bits and pieces of gameplay footage from the first boss fight of the game- check it out through here. Insomniac Games have also confirmed what frame rates and resolutions the game will be targeting on PS5 in its Performance and Fidelity modes. 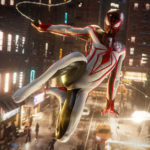 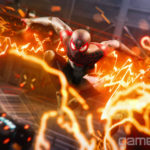