ATLANTA — Republican lawmakers in Georgia muscled legislation through the state House on Monday that would roll back voting access, over the objection of Democrats and civil rights groups gathered at the Capitol to protest.

House Bill 531 passed the lower legislative chamber by a vote of 97-72. It now goes to the state Senate for more debate.

The far-reaching bill would require a photo ID for absentee voting, limit the amount of time voters have to request an absentee ballot, restrict where ballot drop boxes could be located and when they could be accessed, and limit early voting hours on weekends, among many other changes.

It is one of a flood of election bills being pushed by GOP lawmakers across the country this year that would add new barriers to voting.

Republicans say the measure is needed to restore the public’s confidence in elections, after former President Donald Trump and his allies relentlessly pushed false claims about fraud.

“House Bill 531 is designed to begin to bring back the confidence of our voters back into our election system,” said Republican Rep. Barry Fleming, the measure’s chief sponsor.

Rep. David Dreyer (D-Atlanta) speaks to demonstrators at an HB 531 protest outside of the Georgia State Capitol Building on day 25 of the legislative session in Atlanta, Monday, March 1, 2021. 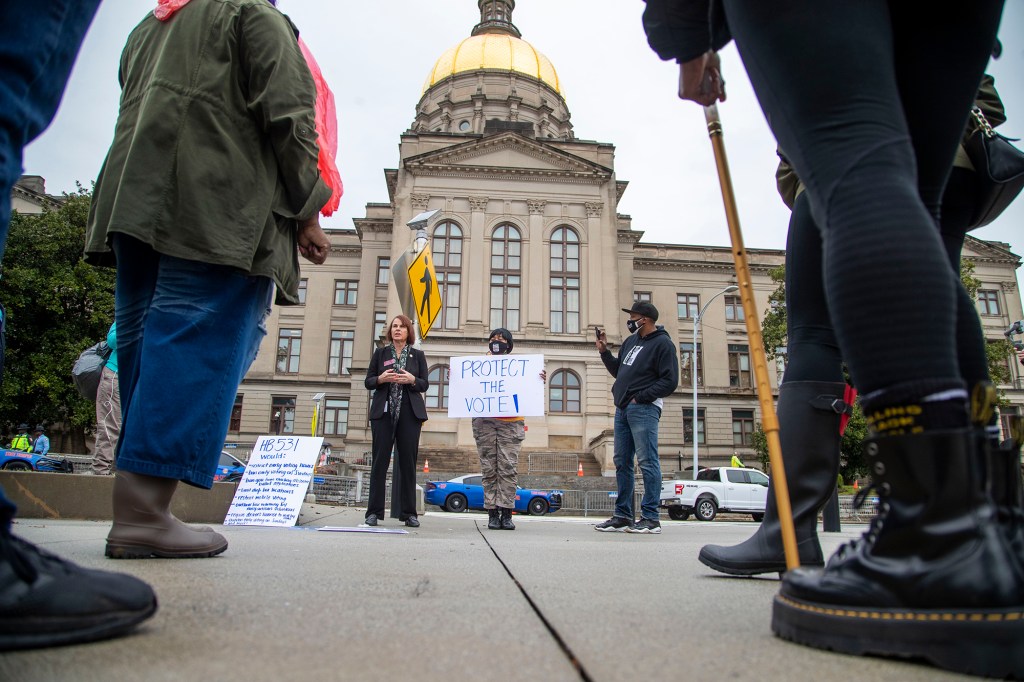 Rep. Angelika Kausche (D-Johns Creek) speaks to demonstrators at an HB 531 protest outside of the Georgia State Capitol Building on day 25 of the legislative session in Atlanta, Monday, March 1, 2021.

Some Seahawks fans are sleepless over Russell Wilson’s future in…

“It’s pathetically obvious to anyone paying attention that when Trump lost the November election and Georgia flipped control of the U.S. Senate to Democrats shortly after, Republicans got the message that they were in a political death spiral,” Democratic Rep. Renitta Shannon said. “And now they are doing anything they can to silence the voices of Black and brown voters specifically, because they largely powered these wins.”

Dozens of protesters gathered just outside the Capitol on Monday in opposition to the bill, chanting “say no to voter suppression” and “protect the vote.”

“Today, before the eyes of this country, Georgia is poised to pass some of the most egregious, dangerous and most expensive voter suppression acts in this entire nation, rolling back years of hardball progress and renewing our own reputation for discrimination,” the Rev. James Woodall, president of the Georgia NAACP, said at the rally.

Alaina Reaves, the president of the Clayton County Young Democrats, was among the protesters.

“We take one step forward and then you know these legislators are trying to bring us up to two steps back,” Reaves said.

Later Monday, the state Senate Ethics Committee approved a Republican-backed bill that would limit who can vote absentee in Georgia to those 65 and older, people with a disability and people who will be away from their precinct on Election Day.

That bill would do away with no-excuse absentee voting adopted by a Republican-controlled legislature in 2005. It could soon move to the full Senate for a vote.

Energy-related emissions up in December despite pandemic

Author reveals how his brother killed his mother in new memoir

Most memoirs are a recounting of the author’s own life and experiences. “Everything is Fine” by Vince Granata (Atria Books), out April 27, is a memoir of an entire family — and a tragedy that forever changed its members.

Granata was an only child for the first 4 ½ years of his life. On the day his mother and father returned home from the hospital, he remembers writing “welcome home mommy” in sidewalk chalk outside their Connecticut home. His parents had arrived home with not one but three siblings in tow — triplets Christopher, Timothy and Elizabeth. It was a joyful event. But the birth of his siblings put in motion a tragedy that would take years to unfold.

On July 24, 2014, his brother Tim, 24, attacked and killed their mother in the family home. Claudia Dinan Granata was 58. Tim suffered from schizophrenia. “I won’t take the medication, the medication destroys me, takes my mind, takes me away from God,” he ranted to his mother on the morning of the attack. He had frequently threatened suicide.

“Tim’s demons, electric in his ill mind, convinced him that the woman who had made him peanut butter sandwiches when he was a grass-stained child was the source of his constant pain,” Granata writes. “…After he killed her, he dialed 911, sitting on our front steps, clutching a white Bible.”

This is a memoir about a horrifying crime, but it is also a book about mental illness, and the family’s ongoing attempts to get help for Tim in a system that is hopelessly flawed. Tim was hospitalized at the Yale New Haven Psychiatric Hospital in February 2014. In the weeks leading up to the murder, there were numerous signs that he needed to return, but he refused to go back.

“Eventually, I had no choice but to look at loss and pain, at all the pieces of my family’s story that I didn’t think I could ever understand,” Vince writes. “It was this process, recognizing the pieces, struggling to put them in order, that almost destroyed me. It’s also what allowed me to live again.”

Tim was found not guilty by reason of insanity.

As academic institutions look toward the post-COVID-19 future of education, some are implementing strict vaccine requirements ahead of the upcoming semester as others incentivize or urge students to pick up the inoculations.

Many colleges already require students to provide proof of certain vaccines, but those have been in use for years. The three FDA-approved COVID-19 vaccines are all less than a year old.

But now that vaccines are open in many places to people age 16 and up, colleges are beginning to look into how that can benefit their reopening plans.

“Students have an option to come to Oakland University and not stay in residence halls,” Oakland President Dr. Ora Pescovitz told Fox 2 Detroit this week. “Only 20% of our students live on campus. The other 80% are commuter students.”

The school is offering religious and medical exemptions to students who provide proof to the dean of students.

But she said more than 1,000 people signed up for vaccines within the first six hours after the school announced the new requirement.

Northeastern University in Boston is going a step further and requiring COVID-19 vaccinations for all students before the fall 2021 semester as part of its plan to return to full-time, in-person learning.

“We will continue to follow all state and federal laws as they evolve,” Nova President George L. Hanbury II said in a statement.

The Associated Press contributed to this report.

NASA’s Perseverance Mars rover took a selfie with the Ingenuity helicopter on April 6, 2021, using the WATSON (Wide Angle Topographic Sensor for Operations and eNgineering) camera located at the end of the rover’s long robotic arm. Perseverance’s selfie with Ingenuity is constructed of 62 individual images, taken in sequence while the rover was looking at the helicopter, then again while looking at the WATSON camera, stitched together once they are sent back to Earth.
NASA/UPI/Shutterstock

To the delight of social media users, NASA’s Perseverance rover used a camera on the end of its robotic arm to snap a selfie with the Mars Ingenuity helicopter this week ahead of its historic flight mission.

Shown about 13 feet apart in the pictures taken on April 6, 2021, or the 48th Martian day of the mission, the rover used its WATSON (Wide Angle Topographic Sensor for Operations and Engineering) camera on the SHERLOC (Scanning Habitable Environments with Raman and Luminescence for Organics and Chemicals) instrument.

In a release, NASA’s Jet Propulsion Laboratory (JPL) said Wednesday that the selfie had been constructed using 62 individual images — taken in sequence — that were stitched together.

It noted that the Curiosity Mars rover, which landed on the red planet in 2011, takes similar “selfies.”

Ingenuity, which has been released on the Martian surface, is scheduled to attempt the first-ever powered and controlled flight of an aircraft on another planet no sooner than April 11.

Once the team at JPL is ready, Perseverance will relay the helicopter’s final flight instruction from mission controllers, according to NASA.

If all final checks and atmospheric conditions look good, the helicopter will lift off climbing at a rate of 3 feet per second and hover at 10 feet above the surface for up to 30 seconds.

After data and potentially images from the rover’s Navigation Cameras and Mastcam-Z are downloaded, the Ingenuity team will determine whether the flight was a success.

The results will be discussed by the team at a media conference that same day.