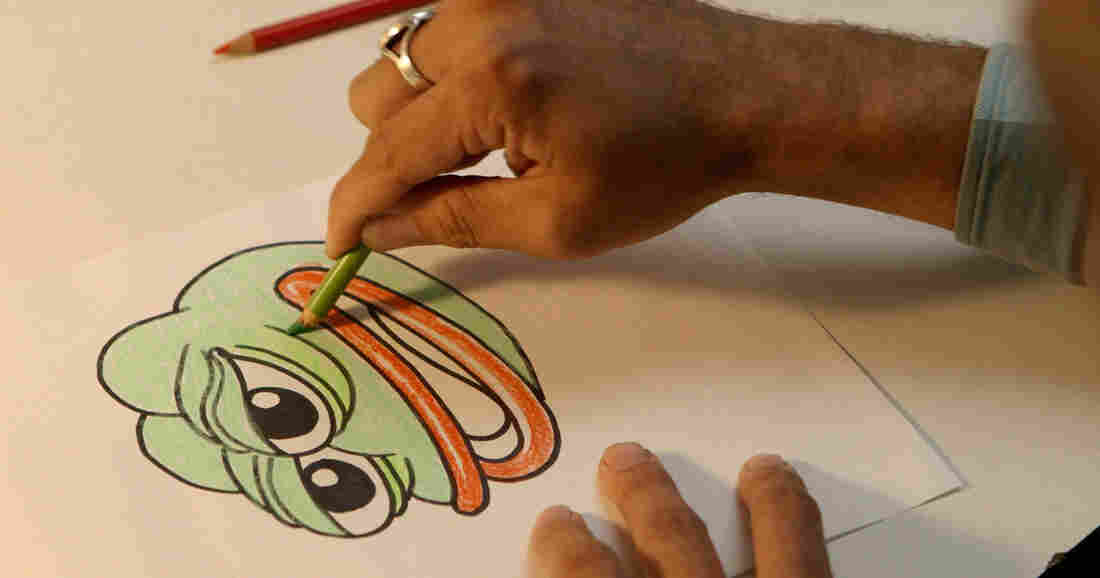 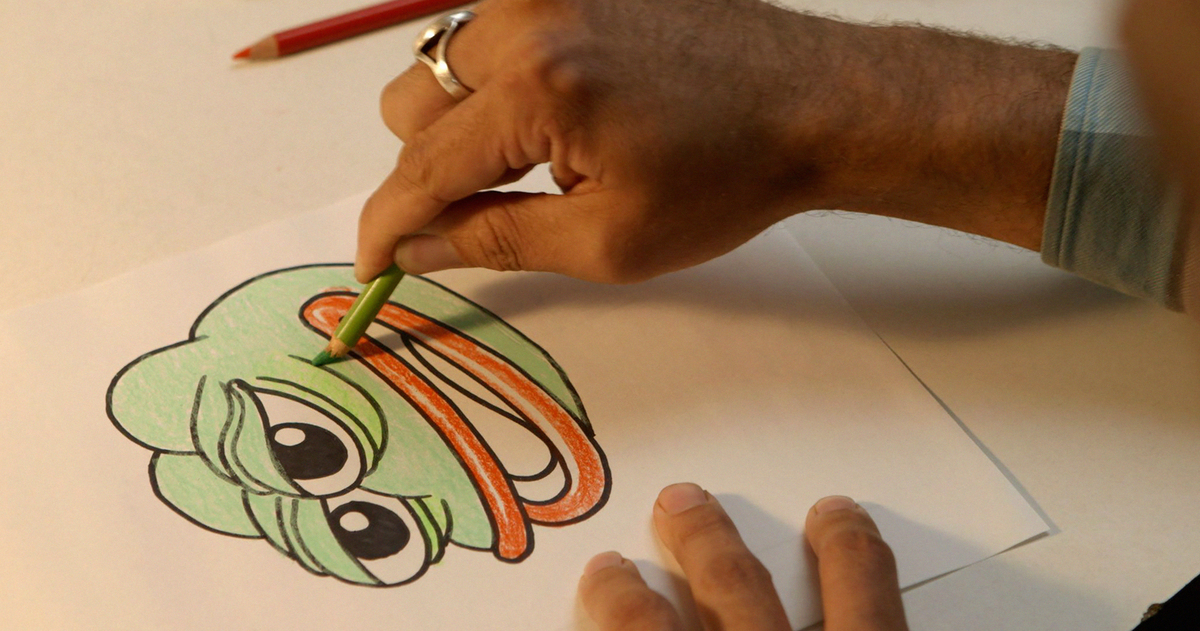 You’ve probably seen him by now — the thin, red lips. The big, expressive eyes. The deep green skin. Sometimes he looks innocent and sweet, like a friend crashing on your couch. Other times he looks like a smugly grinning jerk. The thing about Pepe the Frog is that he can be whatever you want him to be — a stoner icon, a symbol of hatred and bigotry, a beacon of democracy.

The new documentary Feels Good Man traces Pepe through all these transformations, and follows the frog’s creator, cartoonist Matt Furie, and his at-times futile attempts to try to control something inherently uncontrollable: memes. The movie attempts to set the record straight and make clear who Pepe is, but functions more as a case study in how we communicate now and the collateral damage that communication leaves behind.

Furie is a meek, soft spoken guy who feels more comfortable alone at a drafting table than at the forefront of online discourse. Pepe started as a character in Furie’s 2005 small indie comic Boys Club. One comic in particular featured Pepe urinating with his pants pushed all the way down to his ankles, explaining to his roommate that it “feels good, man.” It was a punchline that became a slogan for a certain carefree lifestyle that thrives in between beers and bong hits. From there Pepe was excerpted, repeated, excerpted, repeated — each time drifting further away from his original context, and away from Furie’s hands.

“I didn’t really have the resources to stop it, ” says Furie in an interview with NPR. “Nobody really knew what the protocol was because it’s all online.” There’s not much you can do about anonymous teenagers posting inside jokes online. And for a long while, it stayed that way — just jokes.

“It wasn’t until it got really bad that I stepped up and wanted to try and take a stand,” says Furie.

The documentary explains in detail how and why it got really bad (and it did), but the short version is: Pepe started getting so popular with mainstream culture that the original fans of this no-longer “inside” joke tried to push the normies away with even edgier versions of Pepes — racist Pepes, homophobic Pepes, anti-semitic Pepes. This coincided with President Trump’s similarly trolling presidential campaign, and the then-burgeoning “alt-right” movement, and all of a sudden Furie saw his own creation end up on the Anti-Defamation League’s list of hate symbols, with the normiest of normies, Hillary Clinton, explaining why Pepe was bad.

If this all feels a little stupid — that’s all intentional. Through interviews with journalists and experts on extremism on the Internet, the documentary explores the well-oiled right wing propaganda machine built on bad faith arguments meant to make you feel unsure, and dumb, and ridiculous. If you go back and look at the plethora of interviews Furie did around the time of the ADL listing, there’s a sense of wishful thinking on Furie’s part: that this is just a phase, Pepe won’t be a hate symbol forever. He tried working with the ADL and fellow cartoonists to flood the online space with “positive” Pepe imagery. He tried “killing” Pepe in one of his comics to wash his hands of it. Both fundamental misunderstandings of how the Internet works. But the documentary’s director, Arthur Jones says those were the tools Furie had available to him.

“Those were his earnest attempts to try to express the true intentions of Pepe as a character,” says Jones. 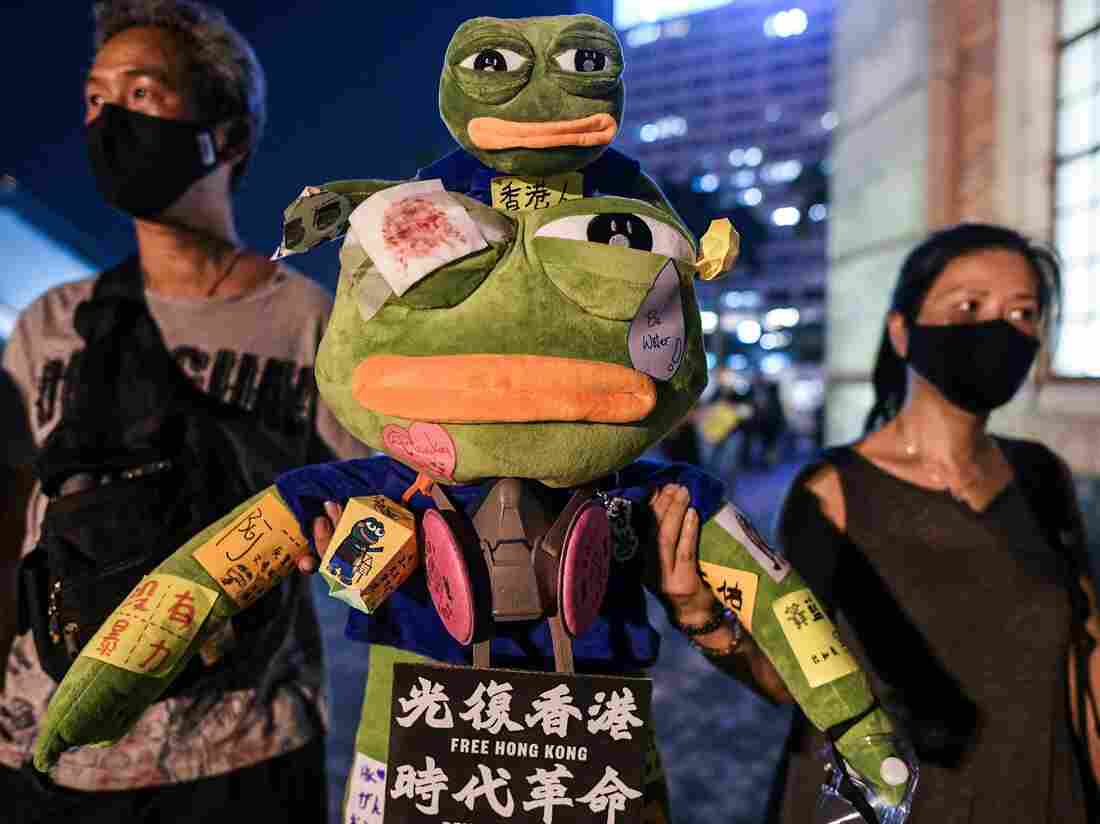 During the 2019 pro-democracy protests in Hong Kong, Pepe became a symbol of resistance. 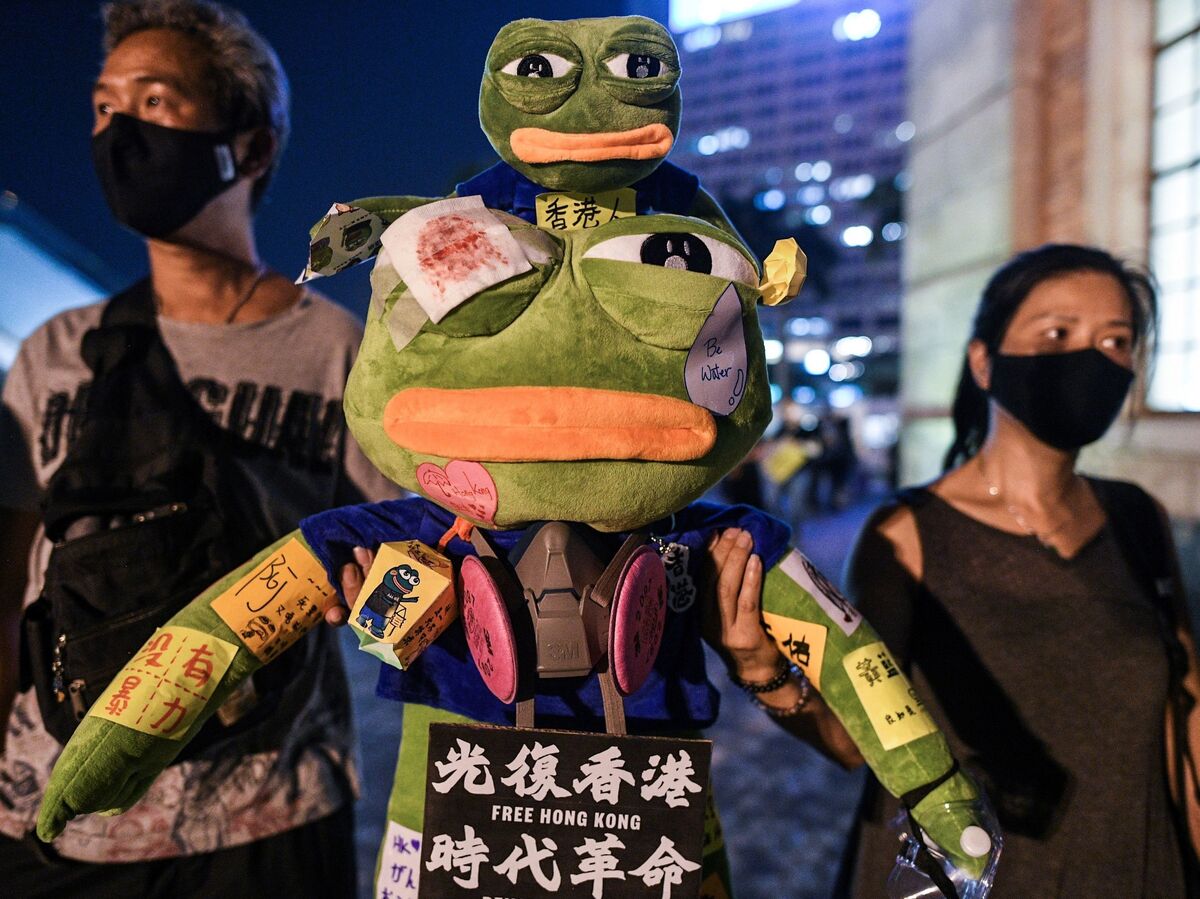 During the 2019 pro-democracy protests in Hong Kong, Pepe became a symbol of resistance.

In the corners of the Internet where racist Pepes run rampant, earnestness doesn’t count for much. Lawsuits, on the other hand, do. The wins Furie collects under his belt in the movie are mostly legal ones, using copyright law to issue take down notices, file suits, etc. Which he was only able to do through the help of a law firm working pro-bono. See, cartoons taken out of context aren’t new, nor solely relegated to the Internet. Stroll down any boardwalk and you’ll eventually catch some bootleg Minions merch. But these are mostly kept in check through legal actions by people who can afford them.

“[Furie] doesn’t have this multi-million dollar conglomerate behind him pushing the character and the branding of Pepe,” says the documentary’s producer Giorgio Angelini. “So in that void, the collective consciousness of the Internet creates that brand.”

And as the Internet has shown time and time again, if you allow its collective consciousness to fill a void, that void will get filled with Nazis.

But Furie wasn’t wholly wrong when he said that the link between Pepe and hatred would last forever. Pepe showing up at the pro-democracy protests in Hong Kong in 2019 took the filmmakers by surprise. Elsewhere, on the popular live streaming platform Twitch, Pepes are thrown around in the chat apolitically, mostly devoid of the problematic baggage he was saddled with four years ago. But who knows how long this will last. With another presidential election in just a few months, the meme wars will only continue to heat up, and phases do tend to repeat themselves given a long enough time.

Talking to Furie over Zoom, there was a Pepe plushie hanging on a wall over his shoulder. Furie has at times been sick, defensive and exasperated with Pepe. But as much as the Internet can separate Pepe from Furie, Furie can never really separate himself from Pepe — and so clearing Pepe’s name is just as important as clearing his own.

Whoopi Goldberg Reflects On Losing “Everything” After Controversial Political Remarks

Trump is trying to rewrite history on the coronavirus. Here’s the truth

The right man for the job: how Bob Woodward pinned Trump to the page