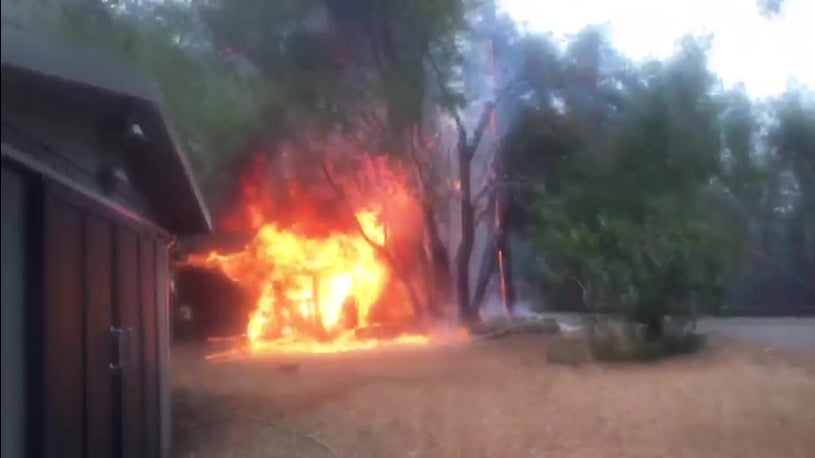 A fourth death has been attributed to a wildfire burning in Shasta County, California, that has destroyed more than 140 homes, businesses and other structures and scorched more than 81 square miles of land.

The cause of the Zogg Fire is unknown. But an unprecedented string of wildfires across California this year is being fueled by a triple threat of record-breaking heat, extreme drought and often windy conditions.

Shasta County Sheriff Eric Magrini said in a news conference Wednesday that the latest victim had been airlifted from the Zogg Fire on Sunday, the day the blaze started.

“It’s unfortunate, my condolences go out to a fourth death that we’ve had as a result of this,” Magrini said. “This was an individual who was evacuated with significant burns on the day of the origin of this fire. He was transported to a hospital and we received word last night that he succumbed to his injuries.”

The sheriff had previously announced three deaths attributed to the fire near Igo, about 12 miles southwest of Redding. None of the victims had been identified as of Wednesday afternoon.

In all, 30 people have died in California wildfires, all of them since Aug. 15 when dozens of large fires were sparked by lightning. Some of those are still burning, including the August Complex Fire, the largest ever recorded in the state.

The Glass Fire, burning in Napa and Sonoma counties, grew to more than 75 square miles. Photos and video posted to social media by the Napa County Sheriff’s Office showed the relentless flames eating away at the bone-dry vegetation.

While some evacuees near Santa Rosa were allowed to return home, additional evacuations were ordered in areas near Calistoga, the San Francisco Chronicle reported. The Glass Fire had displaced more than 80,000 people. At least 61 buildings have been damaged or destroyed.

“It’s just stuff,” Pierce told the Chronicle. “It’s not like a lost person.”

Pierce’s son was able to snap a photo of her burned down home and send it to her.

Two firefighters battling the Glass Fire were forced to deploy their emergency shelters, The Associated Press reported. They escaped without injury.

It was at least the third time in this brutal fire season that firefighters in California took the drastic, last-minute step of deploying the shelters to save their own lives.

Fourteen firefighters had to hunker down under their shelters, which look like space blankets, as rushed over them in the Los Padres National Forest on Sept. 8. Three were hospitalized but later released. A similar scenario played out a day later in Butte County. A day later, a crew fighting a deadly blaze in Butte County was overrun by flames when winds shifted and its members escaped with only minor injuries after deploying emergency shelters.

Since the beginning of the year, more than 8,000 wildfires have burned well over 5,625 square miles in California.

The Weather Company’s primary journalistic mission is to report on breaking weather news, the environment and the importance of science to our lives. This story does not necessarily represent the position of our parent company, IBM.

“Proud Boys: Stand back and stand by”: Trump refuses to condemn white supremacists at debate

Sen. Chuck Grassley: ‘I’d be very concerned’ about how Donald Trump’s tax returns got out