The NYC subway may not always come on time, but sometimes it delivers life-changing surprises.

In August 2000, social worker Danny Stewart was heading to meet his boyfriend for dinner when he made a shocking discovery: An infant, wrapped in a sweatshirt, nestled into a corner of the 14th St. A/C/E subway station exit.

He initially thought it was a doll — until he saw it moving.

“I didn’t think it was real and was watching it…and then it moved a leg,” Stewart, who was then 34, told The Post at the time.

Today, Stewart recalls being in a state of disbelief.

“I thought maybe there was someone nearby who knew what was going on — that there was a baby here,” Stewart, 55, told The Post. “I scanned, looking, but didn’t see anyone. There was a baby on the ground and no one was around. How could this be?”

Afraid to move the baby, he raced to a nearby payphone to call 911 — then rang his boyfriend, Peter Mercurio, who headed to the scene from his nearby Chelsea apartment.

“I ran down the stairs and made sure it was breathing and then called 911,” he said at the time. “It was unreal.”

Mercurio arrived as the cops were taking away the newborn infant — its umbilical cord still partially intact. He was brought to St. Vincent’s Hospital in stable condition.

“You know, you’re going to be connected to that baby in some way for the rest of your life,” Mercurio, a web designer, told Stewart, according to the BBC.

“[Eventually,] this child is going to learn of the night he was found and he may want to find the person who discovered him. Maybe there’s a way that we can find out where he ends up and send a birthday gift every year on this date.” 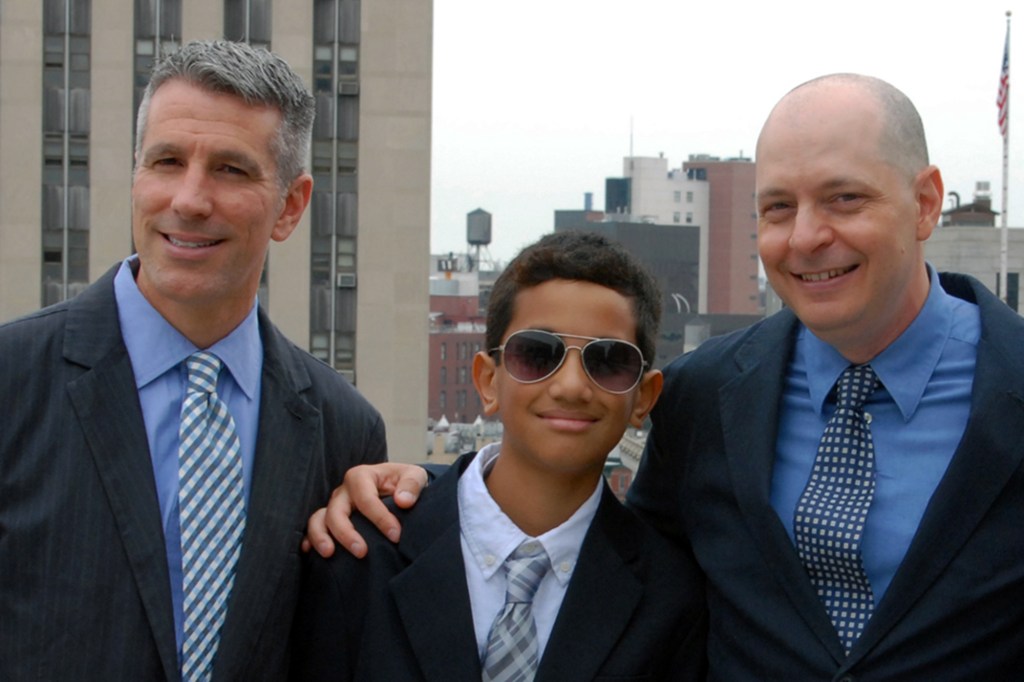 Kevin with his dads.

While the Miami Dolphins already have traded out of the…

At first, it didn’t seem like that would happen. Stewart had been unable to find the baby on a visit to St. Vincent’s and so the couple, who had met through a local softball league, resumed their regular lives.

Then, in December, Stewart was invited to testify at a family court hearing.

After his testimony, the judge asked him a question that would change the course of his life.

“Would you be interested in adopting this baby?” she asked.

“When the judge asked me if I was interested in adopting, what I blurted out was an instinctual yes,” Stewart said. “But I was once again in disbelief that she was asking the question. That is not what was supposed to happen.”

Before discovering the baby on the subway, he and his boyfriend had never really talked about starting a family.

“In our three-and-a-half years together, we had had one extremely brief conversation about kids,” Mercurio, 52, told The Post. “We didn’t have any money, we lived in a really small space with a roommate. We would never have become parents [on our own].”

Mercurio, then 32, was initially opposed to the idea, but Stewart felt fate’s hands at work and managed to convince him otherwise.

“I felt like this was not even an opportunity, it was a gift, and how can you say no to this gift,” Stewart told the BBC.

During a visit to the baby’s foster home, Mercurio would hold the child for the first time.

It was in that instant he knew for certain “that I wanted to become his parent,” he said.

The couple anticipated having months to prepare to become parents, but at a Dec. 20 court hearing, the judge asked if they’d like to spend Christmas with the child.

And so, two days later, on a snowy Manhattan morning, the pair went to pick up the boy whom they named Kevin.

The little baby was covered in a blistering rash and remained scrunched in a fetal position.

“It just broke our hearts,” Mercurio said. “He shook like a nervous chihuahua and didn’t cry at all.

“We just slathered him with constant affection and treated the rash, and by Christmas day he was already healing.”

Occasionally, while growing up he would point out to a woman who looked like him and wonder if it was his mother.

But “he always owned his story,” said Mercurio.

“Whether in his quiet moments he reflects on it happily or mournfully we don’t know. I don’t think he’s wishing he’s having another life.”

Today, Kevin is 20, in college, studying mathematics and computer science. Mercurio describes him as “reserved” and “kind of private.” Photos of the family’s numerous national park vacations show a smiling man who now stands over six-feet tall.

In September, Mercurio published a children’s book, “Our Subway Baby,” about Kevin’s story. “Where there’s love anything is possible,” reads the back cover.

While dropping Kevin off at college, his dads gifted it to him.

“About a week later he texted us and said, ‘I’m so proud of this book,’ ” said Mercurio.

While Kevin “doesn’t go around telling people his story,” he now keeps the book on the corner of the desk in his dorm, where he’s an RA.

“When dormmates come to talk to him, they see it — that’s his way of telling his story without verbalizing it.”

Mercurio and Stewart have since moved from Harlem to Chelsea, not far from what they now refer to as “Kevin’s Corner” — which still holds an emotional place in their hearts.

“When I walk through that subway station, waves of emotion come over me,” said Mercurio.

And the pair are still in touch with the judge who oversaw their adoption of Kevin: In 2011, when New York legalized gay marriage, she was the one who officiated their wedding.

She attended Kevin’s high school graduation party, and Mercurio sent her a copy of “Our Subway Baby” when it was published. They exchange holiday cards every December.

Even now that Kevin is grown, they can’t believe the kismet of finding him all alone.

“You always hear anything can happen in New York, and this solidified it for me,” said Mercurio. “The idea of looking to the future and thinking where your life is going to be at some point, I don’t do that anymore, because anything is possible.”

A Maine elementary school is rallying to give a beloved service dog a new leash on life.

Ory, a 16-month-old professional pup who works in the Willard School’s special education department, was diagnosed with hip dysplasia, degenerative hips, and torn ACLs in both knees, according to WMTW.

Ory works with special needs students at the school, helping to calm them during moments of emotional turmoil.

Now the Sanford community is pitching in to help fund the three surgeries that are needed to get her back in the classroom.

“Ory has had a rough go of it as she has already had ectopic ureter surgery in the fall and has recovered well from it,” a GoFundMe page aiming to raise $20,000 for the dog reads.

“The [hip] surgery] will ensure Ory [lives] a long, healthy and fulfilling life free from pain,” Jess Jones, an Ed Tech at the Willard School, wrote.

By Thursday night, more than three quarters of the funds had been raised, and a paw-fect ending was in sight.

“Ory will be meeting with her surgeon on Monday for a consultation,” an update from the grateful organizer read.

“She’s only 16 months and she deserves that opportunity to have a great life. The vet said her life will be amazing once this is done and dealt with,” Christen Suratt, a teacher who works with Ory, told the local station.

A new study says leaving middle seats open could give airline passengers more protection from the virus that causes COVID-19.

Researchers said the risk of passengers being exposed to the virus from an infected person on the plane could be reduced by 23 percent to 57 percent if middle seats are empty, compared with a full flight.

The study released Wednesday supports the response of airlines that limited seating early in the pandemic. However, all US airlines except Delta now sell every seat they can and Delta will stop blocking middle seats on May 1.

The airlines argue that filters and air-flow systems on most planes make them safe when passengers wear face masks, as they are now required to do by federal regulation.

Researchers at the US Centers for Disease Control and Prevention and Kansas State University estimated how far airborne virus particles travel inside a plane. They used mannequins that emitted aerosol to measure the flow of virus particles through airline cabin mock-ups.

The study, however, did not take into account the wearing of face masks because it was based on a previous study done in 2017, before the pandemic.

Nor did it consider whether passengers are vaccinated against COVID-19. The CDC says vaccinated people can travel at low risk to themselves, although the agency still recommends against nonessential travel.

Airlines for America, a trade group for the largest US carriers, said airlines use several layers of measures to prevent the spread of the virus on planes, including face masks, asking passengers about their health and stepped-up cleaning of cabins. The group cited a Harvard University report funded by the airline industry as showing that the risk of transmitting the coronavirus on planes is very low.

Airlines were divided last year over filling middle seats. While Delta, Southwest, Alaska and JetBlue limited seating on planes, United Airlines never did and American Airlines only blocked seats for a short time. It was mostly an academic question, because relatively few flights last year were crowded. That is changing.

More than 1 million travelers have gone through US airports each day for the past month. While that is still down more than one-third from the same period in 2019, more flights now are crowded. Around Easter weekend, Delta temporarily filled middle seats to accommodate passengers whose original flights were canceled because of staffing shortages.

So close, and yet so far.

As various factors finally make homeownership attainable for frequently maligned millennials, a new hurdle has appeared: Not enough houses to go around.

According to recent findings by investment bank Jefferies, younger millennials between ages 25 and 29 are increasingly buying their first pads, and 30- to 34-year-olds are doing so at even higher rates, Insider reported.

The only problem is there aren’t enough starter homes available, an issue that’s existed since before the coronavirus pandemic and is a result of profit-seeking real-estate investors buying the pads, increasingly expensive construction costs and more restrictive zoning rules.

Despite being much less economically well-off than previous generations were at their age, millennials in fact led home-buying in 2020, significantly motivated by the pandemic. According to an Apartment List’s Homeownership report, 40 percent of the age group now own homes, while a Clever Real Estate survey notes that 30 percent started house-hunting earlier than planned due to COVID-19.

But unless contractors can somehow quickly construct 2.5 million homes — the amount America is short on, according to Jefferies — in the next year, millennials may be left holding yet another form of unfortunate financial cards.

In another recent real estate boom significantly inspired by the pandemic, sales of homes built more than 100 years ago rose by 16 percent in 2020 in the tri-state area compared to last year, with a median sale price of $236,000, The Post reported earlier this month.

Not booming during that same period, however, were New York City pads, which saw a 6 percent overall sales decline. That trend has a few notable exceptions, however, including Brooklyn townhouses — for which demand is relatively sky-high.

“I have seen more demand for brownstones, too, especially in Brooklyn, where the market seems to be on fire. There is more demand for properties with outdoor space, and bigger apartments where buyers can carve out home office space as well,” Melissa Cohn, an executive mortgage banker at William Raveis Mortgage, told The Post this month.