Bugatti stunned the automotive world in 2019 when a new version of the Chiron it had developed cracked the 300-mph barrier, making it the fastest production car in the world by a significant margin.

The car, known as the Chiron Super Sport 300+, managed to hit 304.773 mph at Volkswagen Group’s Ehra Lessien test track in Germany, though this isn’t counted as a world record as Bugatti didn’t make the required runs in opposite directions. As a result, the 282.9 mph set by the SSC Tuatara in January is currently acknowledged as the world record. Regardless, the Chiron Super Sport 300+ is plenty fast, and Bugatti probably sold all 30 examples it built fast as well.

Now, there’s a new Chiron Super Sport, and it’s essentially a Chiron Super Sport 300+ with added luxury and a more forgiving chassis. Its top speed is also limited to 273 mph, hence the missing “300+” in the name. According to Bugatti, the Chiron Super Sport will also sprint to 60 mph from rest in under 3.0 seconds, hit 124 mph in 5.8 seconds and 186 mph in 12.1 seconds. The car will also make it to 248 mph 7% quicker than other Chirons.

In contrast with the more track-focused Chiron Pur Sport, the Chiron Super Sport is all about top speed. You’ll immediately notice it features a more streamlined body, which Bugatti says has been optimized for aerodynamics. The crucial factor is generating enough downforce to keep the car glued to the ground, especially at those speeds well above takeoff speeds for commercial aircraft. The resulting design includes a new long-tail section—the rear has grown by almost 10 inches to hold the laminar flow to the bodywork for as long as possible—and a wide rear diffuser integrating stacked exhaust tips. Many of the new parts are 3D-printed, including those exhaust tips. 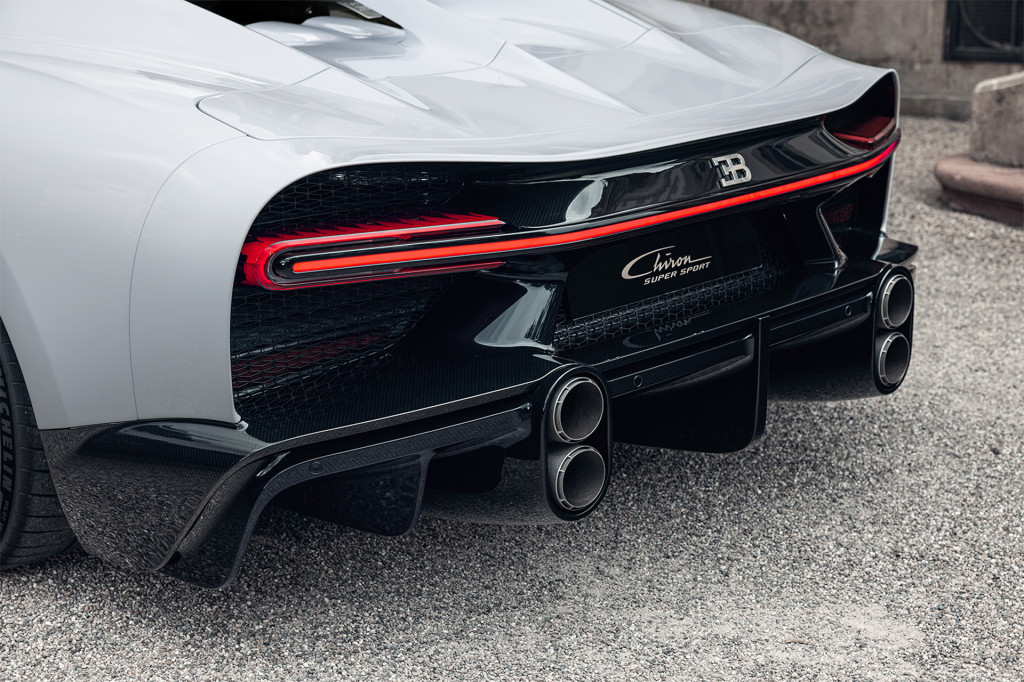 Power comes from the Chiron’s familiar 8.0-liter quad-turbocharged W-16, though the output has been dialed up to 1,578 hp (1,600 in metric figures) instead of the standard 1,480-hp rating. The Chiron Super Sport also rides on a bespoke set of Michelin Pilot Sport Cup 2 tires rated at an insane 317 mph. This is made possible by reinforced belts that were torture tested using a test bench originally built for the Space Shuttle program.

Bugatti also worked on the Chiron’s chassis to ensure it delivers a combination of high-speed stability and comfort. This was primarily done via the dampers, along with harder springs and new tuning for the various driving modes: EB, Handling, Autobahn, and Top Speed. You’ll also notice the new wheel design, which Bugatti has made unique to the Chiron Super Sport. 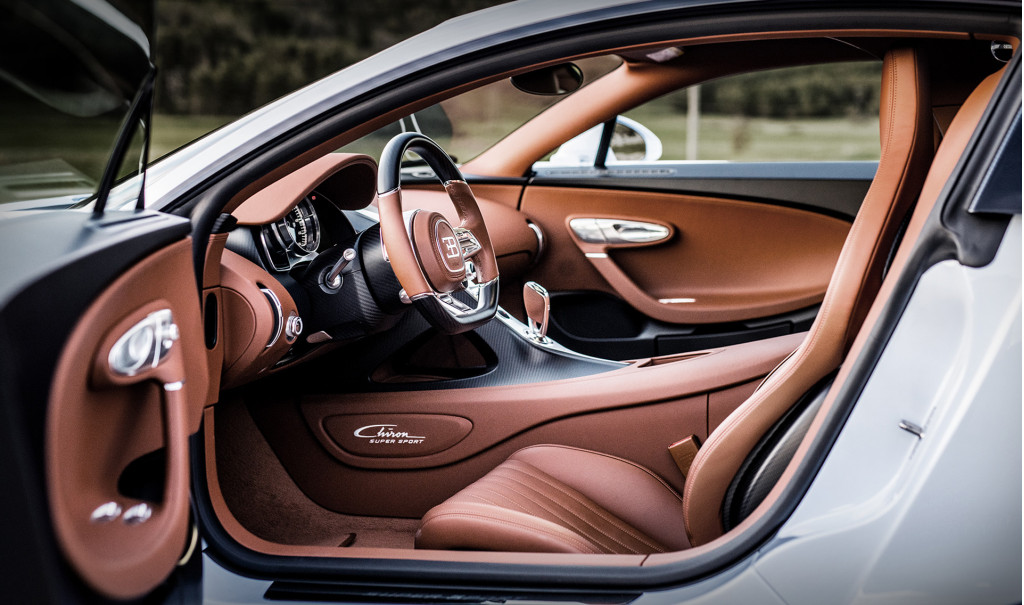 Like the rest of the car, the interior combines elements of comfort and performance. For instance, you’ll find a blend of natural elements like leather and polished aluminum, together with performance touches like carbon fiber.

Pricing for the Chiron Super Sport starts at 3.2 million euros (approximately $3.9 million) and customers can expect to receive their cars in early 2022. Bugatti hasn’t mentioned how many examples are destined for production.

The 2004 Ford Shelby Cobra concept is headed to auction. The one-off drivable concept car inspired by the legendary Cobra roadster will cross the block at Mecum auction in Monterey, California, scheduled for Aug. 12-14.

Codenamed “Daisy,” the Shelby Cobra concept debuted at the 2004 Detroit auto show. Since 2017, it’s been owned by Chris Theodore, one of the designers who worked on it.

This concept was a product of the retro craze that swept the auto industry in the 1990s and early 2000s. Ford had already launched a new Thunderbird with retro styling by the time the Cobra concept debuted. Ford subsequently launched versions of the GT and Mustang with styling inspired by their 1960s predecessors. Ford also built the Shelby GR1 concept in 2004 as a modern take on the Shelby Daytona Coupe race cars of the 1960s.

Unlike most concept cars, the Cobra is fully drivable. It’s powered by a 6.4-liter V-10, which, like the car itself, never made it to production. Other components were sourced from the Ford GT, which was undergoing development at the time.

Cobra creator Carroll Shelby gave the project his blessing, and drove the car for publicity photos (even doing some donuts), but he likely didn’t have much engineering input. Shelby’s involvement was symbolically important, though, as this marked the first time he’d worked with Ford since the glory days of the original Cobra in the 1960s.

Theodore paid $825,000 for the Cobra in 2017. Mecum doesn’t provide pre-auction estimates, but when Theodore and the Cobra appeared on Jay Leno’s Garage recently, car appraiser Donald Osborne said the Cobra was worth $1.5 million. The car isn’t street legal, however, and the auction listing notes that it must be sold to an out-of-state buyer, likely because of California emissions rules.

After checking out the mid-engine Ferrari SF90 Stradale, Jay Leno switched to the front-engine 812 GTS for a recent episode of “Jay Leno’s Garage.”

The Ferrari 812 GTS is a convertible version of the 812 Superfast, sporting a retractable hardtop in place of the Superfast’s fixed roof. So it’s perfect for Leno’s Los Angeles locale.

Like the 812 Superfast, the 812 GTS is powered by a naturally-aspirated 6.5-liter V-12, producing 789 hp and 530 lb-ft of torque. The engine drives the rear wheels through a 7-speed dual-clutch transmission. Ferrari quotes 0-62 mph in less than three seconds, with a top speed of over 211 mph.

When it was unveiled in 2019, the 812 GTS was the first V-12 Ferrari convertible since 2014’s limited-edition F60 America. In terms of regular production cars, it was the first since the 365 GTS/4 Daytona Spider of the early 1970s. However, Ferrari has since unveiled the 812 Competizione A, a more hardcore targa version with 812 hp.

Leno was impressed by the design, noting that the V-12 front-engine cars are Ferrari’s traditional bailiwick. He liked the driving dynamics too, praising the smoothness of the V-12, the comfortable ride, and the handling precision of what is a fairly large car. A four-wheel steering system, shared with the 812 Superfast and originally from the F12tdf, likely helps with that.

A hardcore version of the 812 Superfast is expected to be a swan song for the naturally-aspirated Ferrari V-12. So watch Leno take the 812 GTS for a spin, and listen to that V-12 wail.

Update: This story has been updated after Toyota released an official image of the 2022 Toyota Tundra

The new generation of the Toyota Tundra is finally coming after more than a decade, and now the wait to see the new full-size truck appears to be over.

On Thursday, Tundras.com forum member Tibetan Nomad posted leaked images of the 2022 Toyota Tundra, which were reportedly posted on the TundraCrew Facebook group by a dealership employee. Toyota responded by releasing a single photo of the new truck.

Given the lighting and background, the images appear to be screen shots of official press images or of an in-studio video walk around.

Based on the wheels and wording stamped into the tailgate, the 2022 Toyota Tundra pictured is the off-road-oriented TRD Pro model.

We’ve seen earlier teaser images, so there aren’t a ton of surprises in the front end design. In the images, we see LED lighting, amber marker lights, a driving light in the grille right below the word Toyota, and fog lights at the bottom of the grille. The back of the bulging hood features the trim name, in this case TRD Pro. 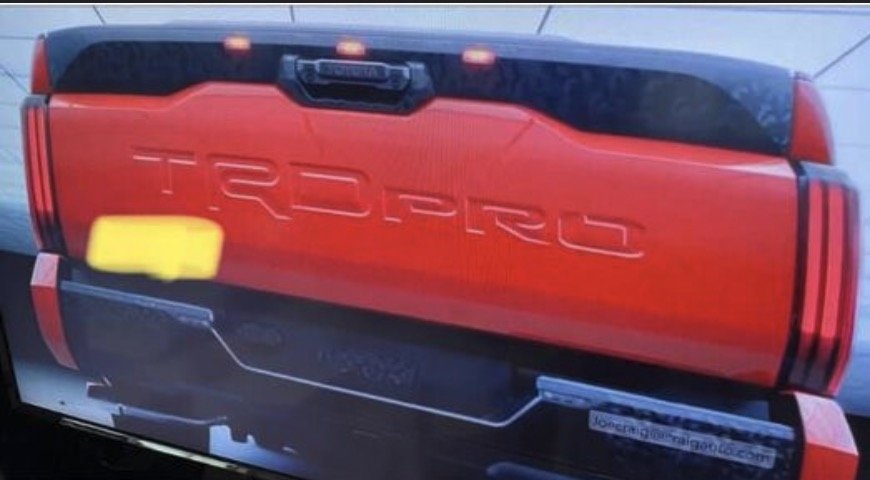 The rear tailgate has TRD Pro stamped into it with three amber LED marker lights above the release handle. Vertical LED taillights have dual lighting elements.

The current Tundra’s 5.7-liter V-8 will likely be retired with the redesign. A new twin-turbo V-6 is expected to power the 2022 Tundra with a hybrid version as an option.

Stay tuned for more on the 2022 Toyota Tundra.

New book takes lessons on aging from our seniorcelebs