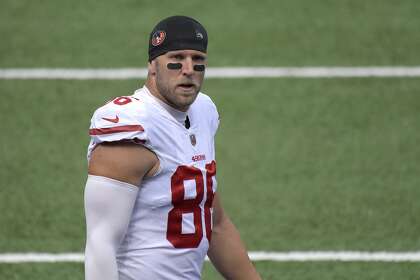 The 49ers waived their long-time long snapper on Wednesday, three days after Nelson, 33, had a series of errant snaps and was benched in a 36-9 win against the Giants.

The 49ers signed Taybor Pepper, 26, to replace Nelson after he was one of four long snappers to work out in Santa Clara on Tuesday. Pepper, a 2017 undrafted free agent, has played in 20 career games with the Packers and Dolphins. He was waived by Miami in May.

Nelson’s performance Sunday clearly inspired his release. But head coach Kyle Shanahan indicated Nelson had been a bit off before he developed what Shanahan termed the “yips” against the Giants.

“Kyle hasn’t been playing as good as he has in the past,” Shanahan said. “It was kind of trending a little bit that way. If you see things trending that way a little bit you try to make a decision before it hurts you. And you guys saw what happened on Sunday.

“Fortunately, we were able to win the game and make sure that doesn’t happen again. That doesn’t mean he won’t come out of it. I actually believe he will. But it’s something that you just can’t risk. You’ve got to decide. We’ve been sticking with it. I think that was the writing on the wall.”

Nelson, who was the team’s second-longest member behind free safety Jimmie Ward, played in 89 games since joining the 49ers in 2014, which was the most on the roster.

Ford to IR: Shanahan said the 49ers will place Pro Bowl pass rusher Dee Ford on injured reserve this week with a back injury that’s caused him to miss the past two games.

Ford, who will miss at least the next three games, will be eligible to return when the 49ers visit New England on Oct. 25. The 49ers were hoping Ford’s discomfort would subside with medication after he underwent an MRI on Sept. 17.

Without Ford and Nick Bosa, who is on season-ending injured reserve, Kerry Hyder (36 snaps), Dion Jordan (22) and Ziggy Ansah (21) served as the 49ers’ primary edge rushers against the Giants.

Samuel back: The 49ers officially opened the practice window for wide receiver Deebo Samuel, who had spent the first three games on injured reserve with a broken foot he suffered in mid-June.

Shanahan sounded a bit more optimistic about Samuel playing on Sunday against the Eagles than he did last week. Samuel was not limited in Wednesday’s practice.

“We just need to see him go through three days (of practice) — (see) what type of shape he’s in,” Shanahan said. “And if he can protect himself, he’ll be out there.”

Shanahan said Williams is having “hip discomfort.” It’s not known if it’s connected to a hip issue that briefly forced Williams to leave the NFC Championship Game in January.

Meanwhile, tight end George Kittle (knee) was not limited in practice, signaling he will play against the Eagles after a two-game absence. Cornerback Ahkello Witherspoon (hamstring) and running back Jerick McKinnon (ribs) were also full participants.

Alvin Kamara on criticism of Drew Brees: I don’t really give a damn

Alabama to get coach, lineman back for Texas A&M

Adam Gase and Dan Quinn Rumors: Will they be fired?